The easy way to manage your PC game saves 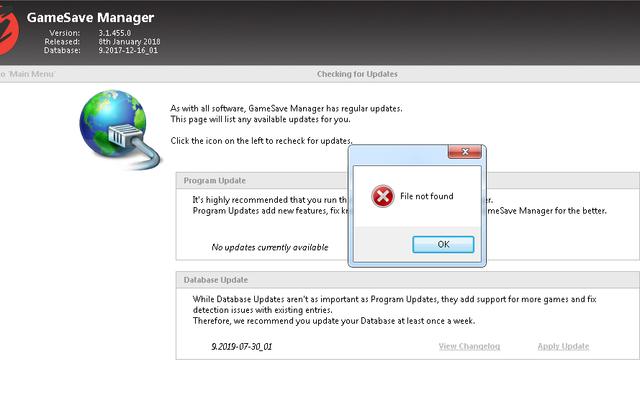 Opened iexplore and cleared browsing history ticking all the options, no change?
Top

I'm having EXACT same problem. I have TWO pcs running Win7 SP1 on same network logged in as Administrator.

The one the won't update WILL happily download and display the changelog and display that an update is available. though.
NO weird chars in my username or computer name. I live in Texas

I run the same antivirus on both and even disabling the AV has no effect on the one that won't update.
They are both on the same network and setting a static network address had no effect.
I have GameSave Manager in a folder on my desktop. I have tried moving it to C:\ but makes no difference.
I have dragged a copy of the entire folder from the pc that works to the second pc and still fails to update.
The permissions and ownership on the folders on both pcs are identical.

One thing I did notice is that if I delete the games.db before trying to update the program does generate a 'short' file of about 5k.
The current games.db file should be around 971k. Inspecting both files in Notepad shows me the smaller file just seems to be a generated header that maybe the downloaded update gets concatenated with?

I know I CAN download the games.db manually from your website, that's what I've been doing for six months.
I found a similar issue in this forum, I think explaining the "solution" of downloading the file manually. That's how I know about this 'work-around' but I wouldn't call that a permanent "solution".
I wish you'd consider looking into this without automatically writing off the question with a flippant response.

What do you think?
Top

crawler261 wrote: ↑16 Nov 2019, 10:10 I wish you'd consider looking into this without automatically writing off the question with a flippant response.

What do you think?

I am in no way writing the issue off.
If I can replicate the issue (or someone else can) regularly enough to track a cause, I will address it.

With that in mind, would you care to send me your settings.ini file from both machines? If you're using FTP options, remove said section from files first (for your own security).
My guess is it's something to do with the program's configuration, but I cannot find a combination that causes it myself.
Top

Database Updates can be manually downloaded via this link.
If you're willing, we can attempt to narrow down a cause for this issue and maybe get a fix out for all. You can find me on Discord most days within this project's 'server', an invite to which can be found by following this link.
Top
Post Reply
6 posts • Page 1 of 1

Users browsing this forum: No registered users and 1 guest